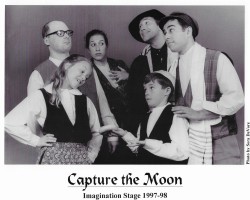 Originally commissioned by Imagination Stage, Bethesda, MD Where Each Had Extended Runs!

Adapted From The Jewish Folktales Of Chelm 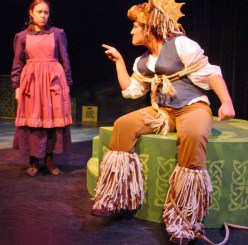 JOURNEY TO THE WORLD’S EDGE

A Folk Tale In The Irish Tradition

YA NOVEL
BRIGID'S JOURNEY TO THE WORLD'S EDGE

now available in paperback from AMAZON

Long after the curtain falls, you can re-visit and enjoy Brigid Sean O’Grady’s heroic journey by reading the YA novel adaptation of the play. BRIGID’S JOURNEY TO THE WORLD’S EDGE a folk tale in the Irish tradition is a somewhat expanded re-telling of Brigid’s quest. Good for ages 10 to adult

The paperback book is available from AMAZON.COM. 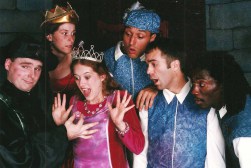 RIDDLE ME A PRINCE

available from the creative team 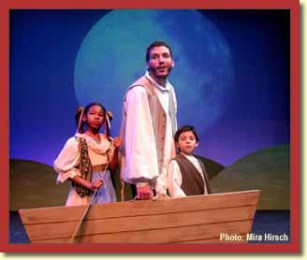 “Capture the Moon is an enchanting new play for young audiences.  The play takes the audience on a comical but instructive journey as little Yossel, his father, and the Rabbi of Chelm, set off to capture the moon.  Even more enjoyable is the ingratiating way this play shows us how the sheltered people of Chelm learn to look beyond their own needs and fears. Take your kids to Capture the Moon.  They'll laugh, they'll learn ... they'll love it!”    Metro Connection, WAMU FM - Washington, DC 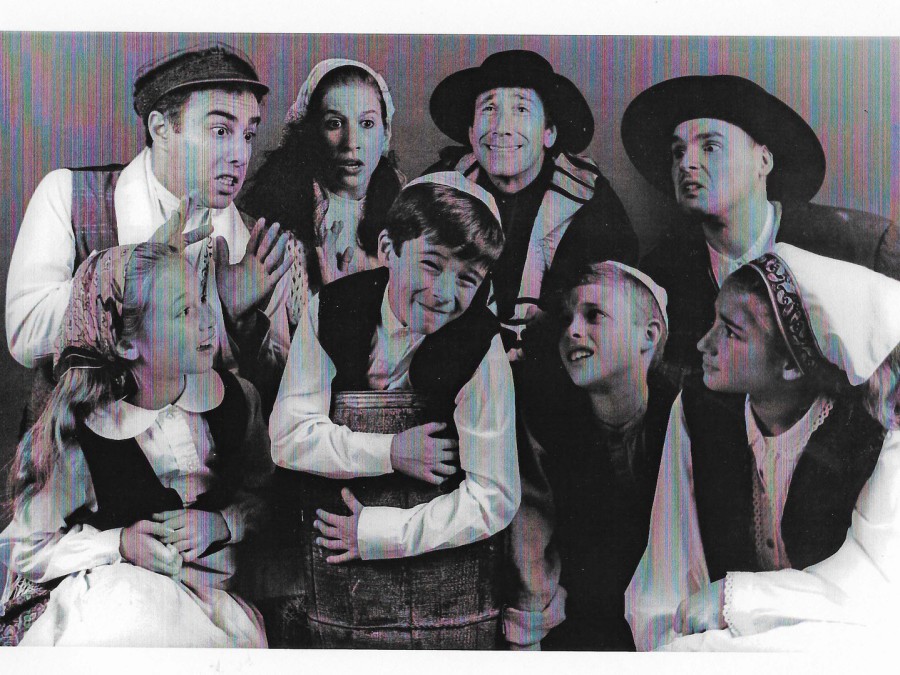 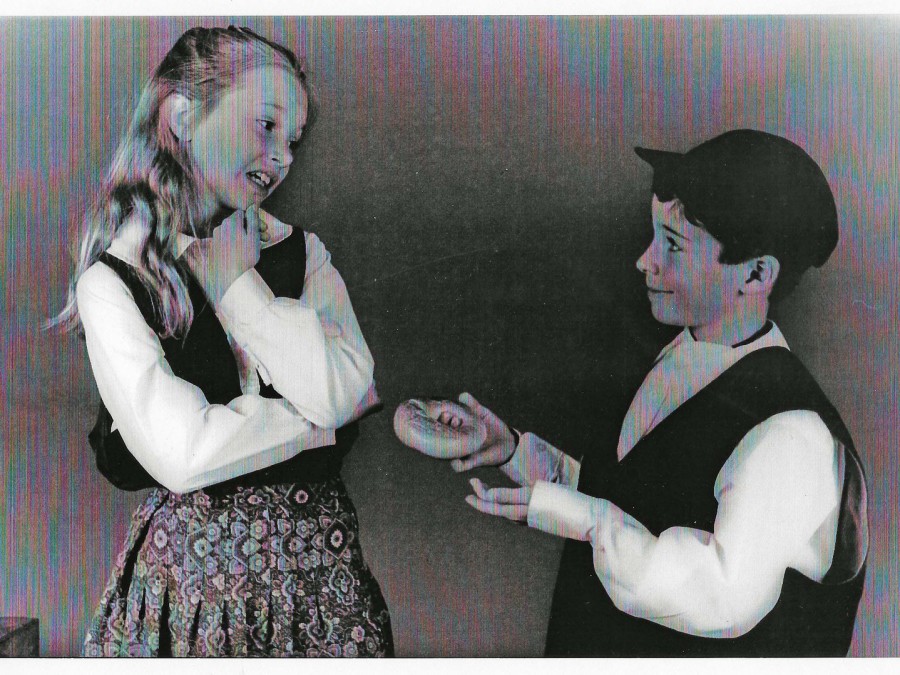 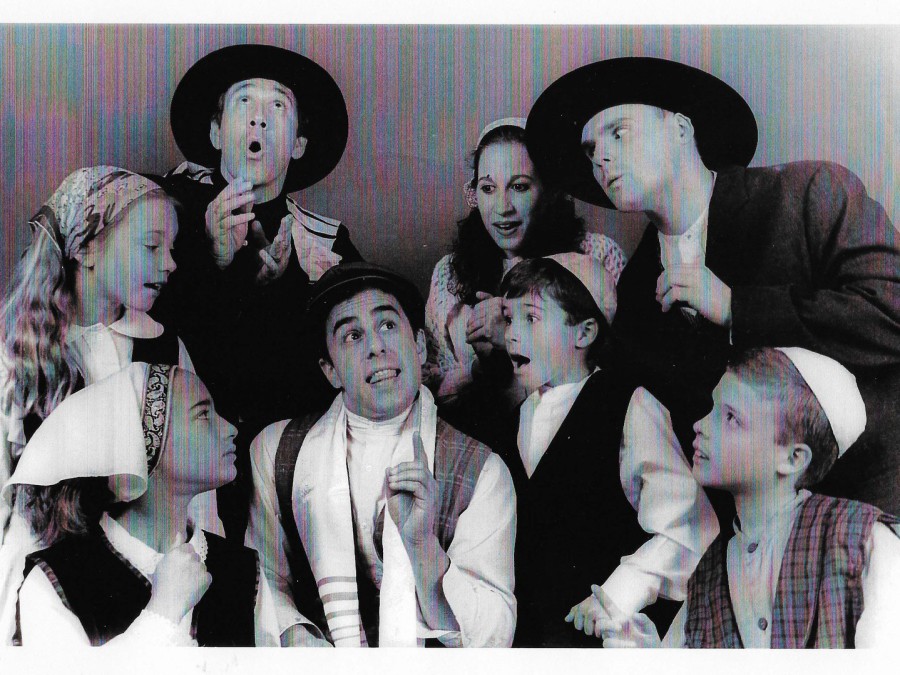 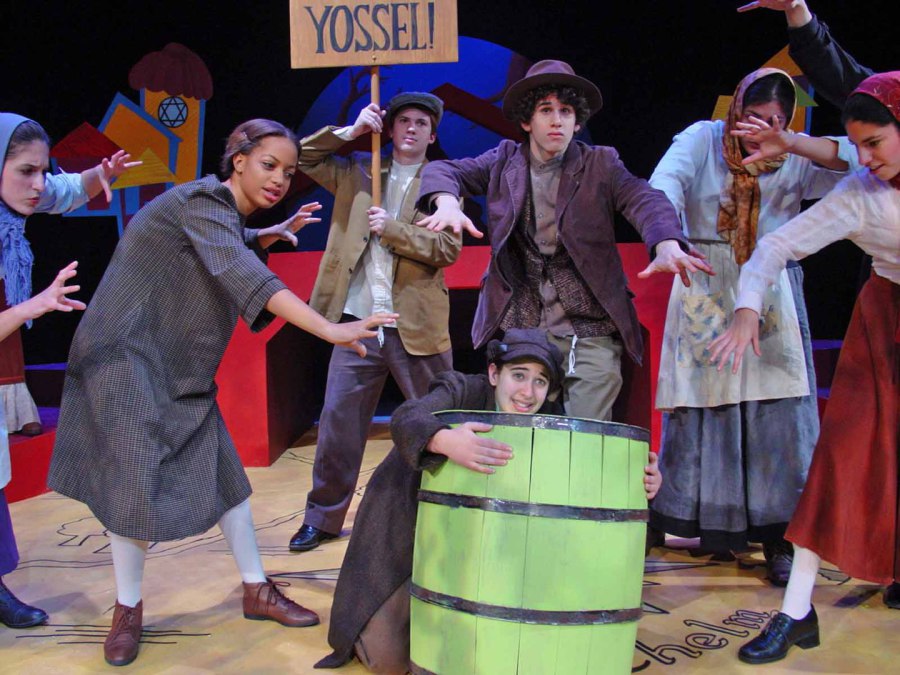 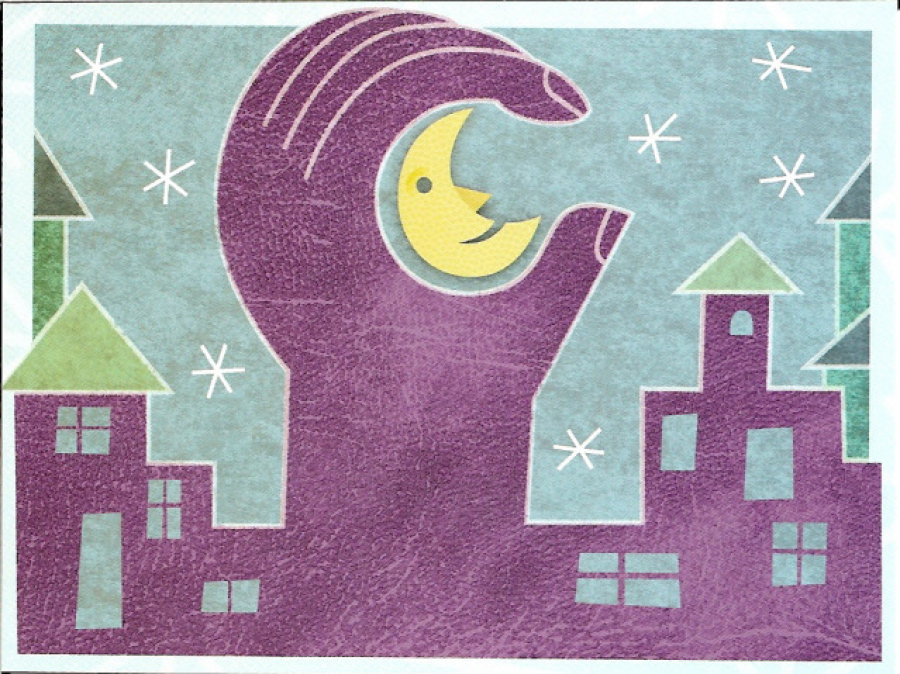 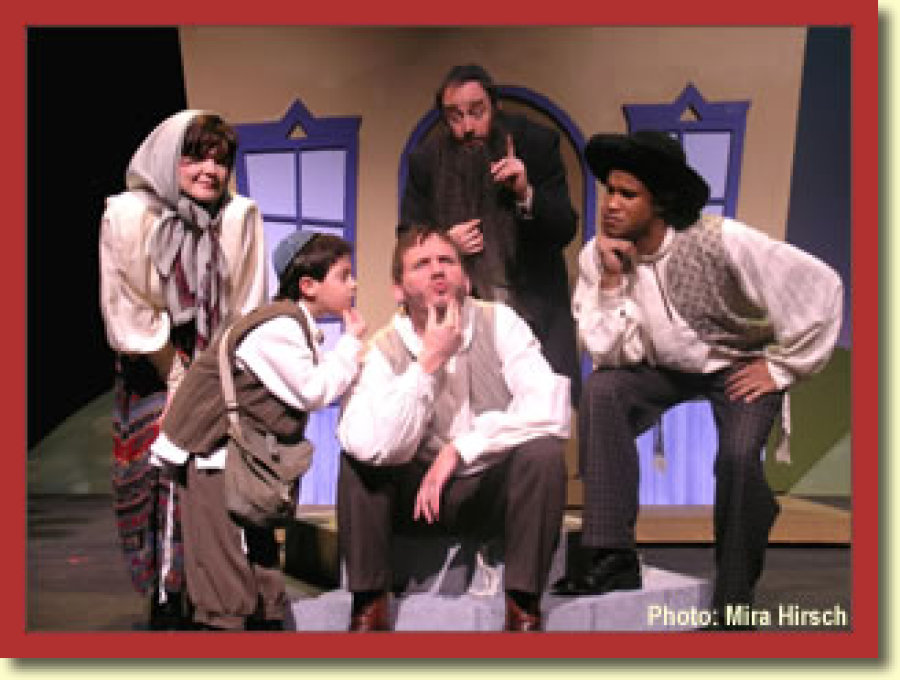 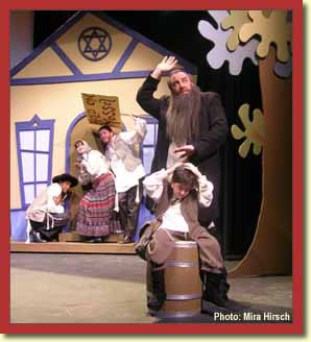 CAPTURE THE MOON, a light-hearted play for 4-11 year olds, is based on the traditional Yiddish tales of Chelm, a mythical Eastern European shtetl  A long time ago, the Jewish folk of Chelm faced a big problem – Darkness.  To overcome the darkness, they decide to capture the moon!  The failure of the first attempt (to capture and store the moonlight in a barrel of water) leads them to seek the help of the neighboring Christian village, to climb their church steeple (almost) up to the moon.  With their neighbors’ cooperation, the Chelmites then journey through the surrounding Christian countryside in search of the moon at its lowest point on the horizon.  On this journey, they become aware of their “differentness”, and learn to appreciate it.  CAPTURE THE MOON does offer -- in children’s terms -- interesting elements of Jewish history.  More than that, though, it is a play about a common devoutness that encourages mutual respect, respect for different ways of thinking and imagining.  Running approximately 50 minutes, the play has been written to be performed by as few as six people (2f, 4m) four of which play multiple roles.  Alternatively, a large cast version of the play is available for schools, also from Dramatic Publishing. The play may be presented with additional performers in the cameo roles.

A WONDERFUL PRODUCTION FOR CHANUKAH!

A gallery of photograps from different productions of CAPTURE THE MOON 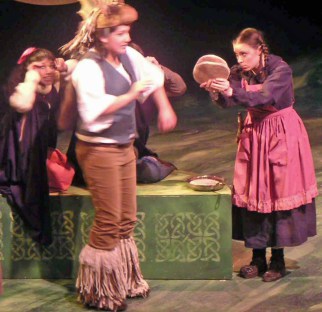 JOURNEY TO THE WORLD’S EDGE

A Folk Tale In The Irish Tradition

(11 roles either gender - the ensemble plays many roles)

"A wonderfully engaging tale that charms and challenges its audience as it takes us into the sometimes sad world of those who are 'different.' Journey successfully mixes the realism of a child's sadness with the enchantment and adventure that will bring her to a happy journey's end." —Diane Ney, Plays International

JOURNEY TO THE WORLDS EDGE is a folk tale in the Irish tradition about young girl of long-ago County Clare in Ireland.  Brigid Shawn O'Grady just wants to be normal.  But Brigid cannot leave her house without being shunned and mocked by everyone in her village for the misshapen foot she'd been born with.  She is isolated by her parents until, one day, she sets off to ask the help of the legendary Sea Mither.  This powerful spirit gives Brigid a magical Bard's Rod to point her way to the well at the world's edge where Brigid will find a sage who will answer her plea.  But getting there will not be easy.  Along the journey, Brigid must pass three tests—one of her heart, one of her mind, and one of her courage. She meets talking animals, fanciful creatures, and a dangerous bog serpent that all challenge her to question what it means to be different.  Steeped in Irish culture and legends, Journey to the World's Edge is about Brigid's journey toward self-esteem and courage.  She finds not only the sage but also a surprising answer for the girl who, from that day onward, became known as Brigid—meaning "strength"—Shawn—meaning "one-of-a-kind"—O'Grady. 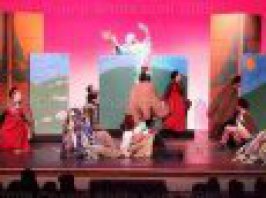 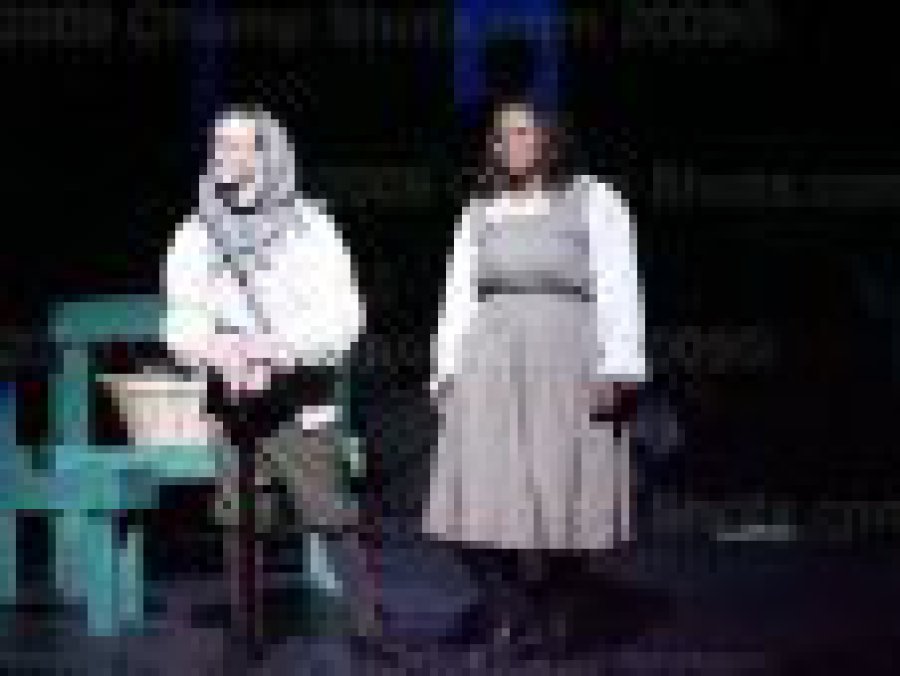 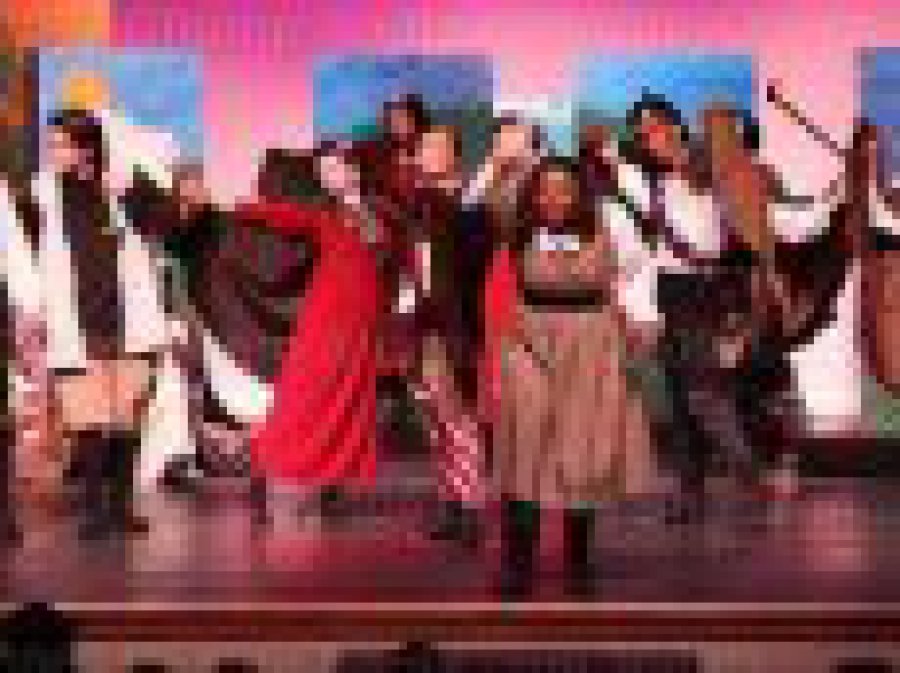 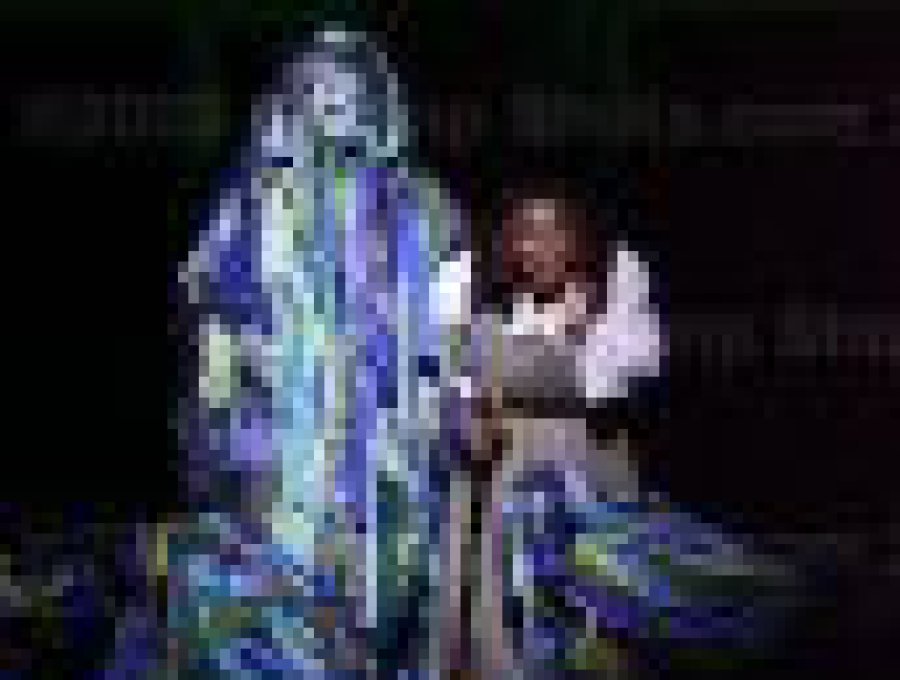 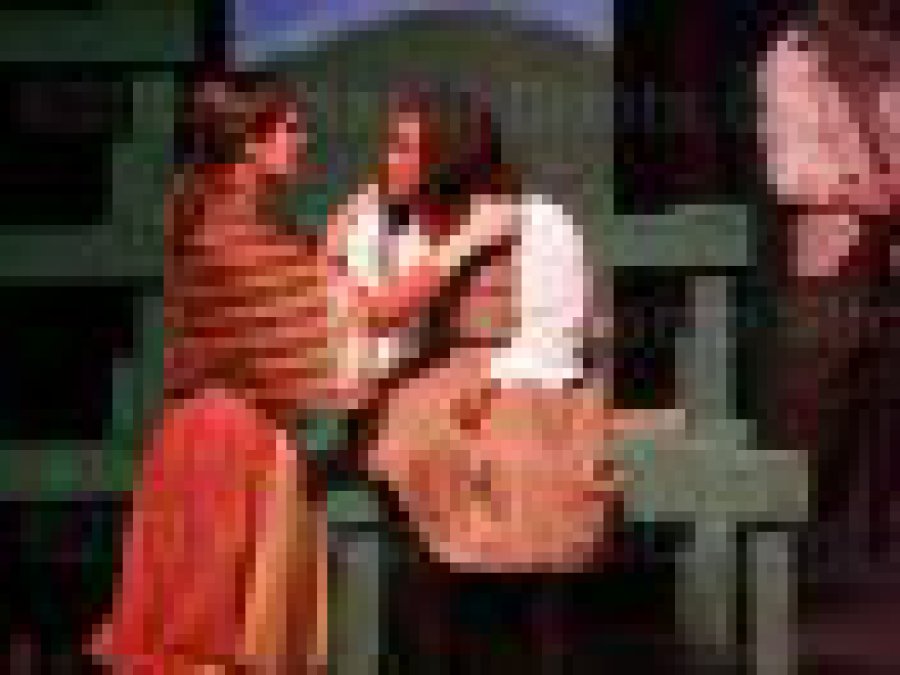 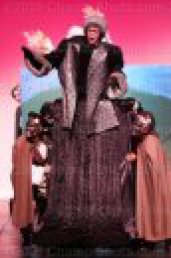 These six pictures are from a high school production of JOURNEY TO THE WORLD'S EDGE in Nebraska.

They won a competition with their production.

I am sorry that these are the only copies of photographs from their imaginative production.

Ernie and I particularly like their version of the giant (left).

a gallery of phorographs of the Imagination Stage Deaf Access Company's production of the large cast version of JOURNEY TO THE WORLD'S EDGE.

Long after the curtain falls, you can re-visit and enjoy Brigid Sean O’Grady’s heroic journey by reading the YA novel adaptation of the play. BRIGID’S JOURNEY TO THE WORLD’S EDGE a folk tale in the Irish tradition is a somewhat expanded re-telling of Brigid’s quest. Good for ages 10 to adult

The paperback book is available from AMAZON.COM. 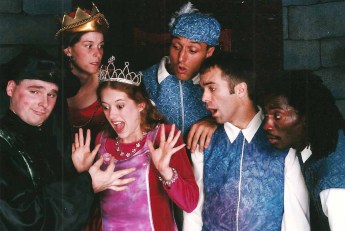 RIDDLE ME A PRINCE

“… a sweet and amusing musical tale about love and growing up.”

RIDDLE ME A PRINCE is an inter-active adventure story with several lively songs.

A rich and evil duke seeks the hand of the lovely Princess Gabriella.  So do three brothers who have known her almost all of her life.  A competition is devised.  Who will bring the princess the most loving gift?  With a wizard’s help, the brothers’ quests take them to the farthest reaches of the world, the beginning of time and into the deepest recesses of the human mind.  Along the way, the audience helps each brother solve a riddle to overcome the treachery of the evil duke.  Princess Gabriella’s final choice teaches her and the audience a lesson about growing up.  Orchestrated accompaniment and underscoring music available on CD from composer Lenny Williams. 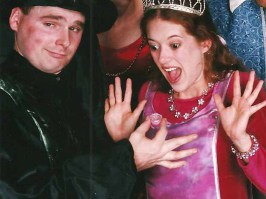 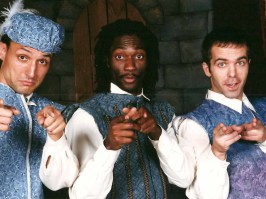 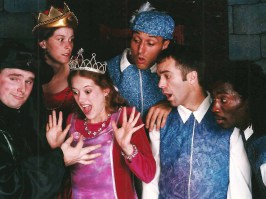 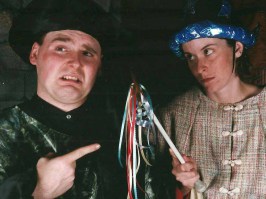 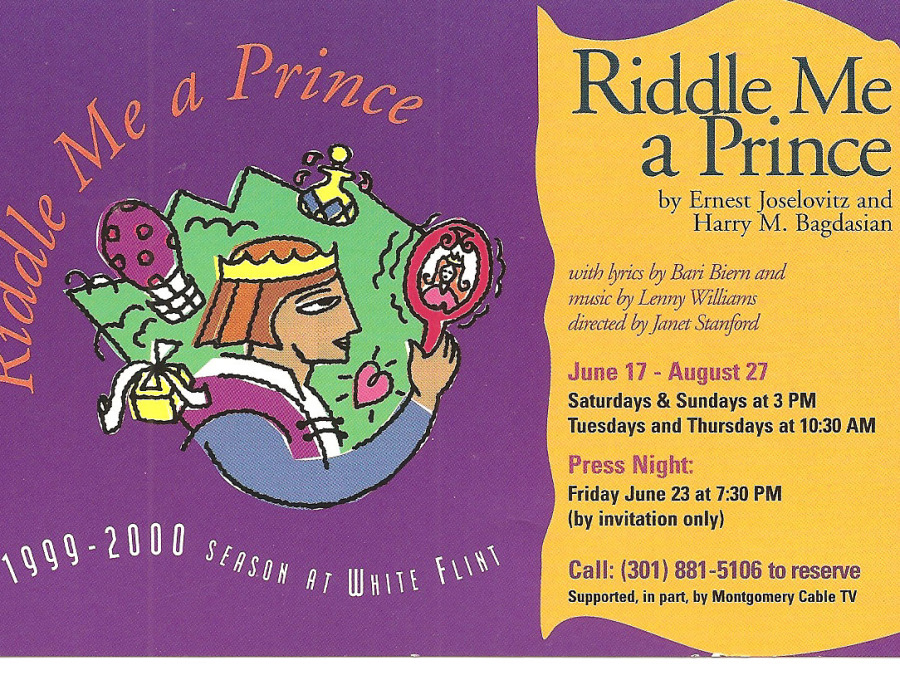