She had gone out to find a pie but all she could find was chopped herring. Okay, I’m getting to the punch line too soon.

So I’m in the projection room of the Biograph theatre in Georgetown, Washington, DC. It’s about 11:30 PM. We’re into our second hour of the “All Night Glut” film festival fund-raiser for New Playwrights’ Theatre (there’s irony, huh? Raising money for theatre by showing films?) You see, Ken Bloom, Associate Producer / Director / PR guy extraordinaire had an incredible sense of humor. (He still does, by the way.) When Melanie and her boyfriend PJ, manager of Washington’s beloved Biograph Theatre, suggest doing a dawn to dusk movie fest as a fundraiser for our theatre company, Bloom titles it “All Night Glut.” Why “All Night Glut?” … because Ford’s theatre was currently presenting a show call “All Night Strut” and … well it made sense at the time. Listen, Bloom is the imaginative kind of guy who, when he finds out that two theatres in town are holding firm to their plans to produce productions of Hamlet because both artistic directors are too stubborn to give in to the other, and that their Hamlet performance schedules overlap on one weekend, he insists we do a production of Hamlet that one weekend as well.

Wouldn’t it be fun if the Friday “Guide To The Arts” read “Hamlet, Hamlet, Hamlet” one right underneath the other?

But we’re NEW Playwrights Theatre and we only do American playwrights.

He then puts out a press release explaining how, in fact, Shakespeare’s plays were written by some guy in New Jersey. The press release also stated that the same author wrote the Boy Scout Handbook. Then ge gets a script of a 30-minute Hamlet and announces he'll do it as a musical. (Life with Bloom was never dull.) 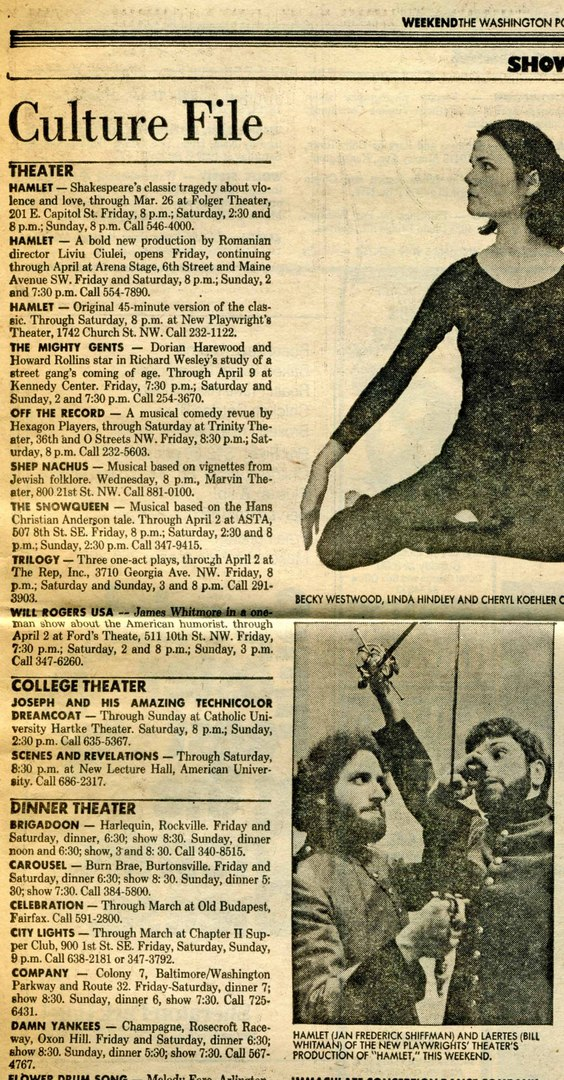 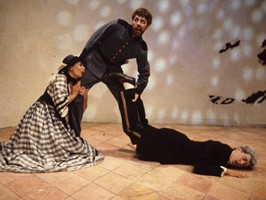 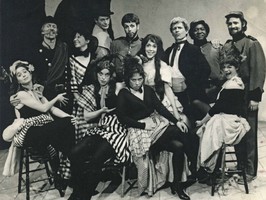 The cast of HAMLET! the musical 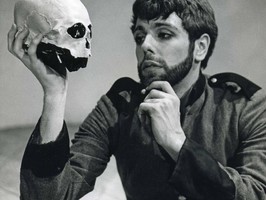 When we were sand-blasting, Bloom moved the phones to the sidewalk

Later maybe I’ll explain how a couple of Bloom bogus press releases were taken literally by the Washington Post which seemed to enjoy publishing the silly information he sent them. You see, Bloom directed a series of very popular musical comedy revues and book musicals by Tim Grundmann at our theatre. Often times, the shows would go into rehearsal without being completely written. So when it came time to alert the press about the “upcoming new Grundmann musical,” Bloom’s imagination kicked into gear. Truth is, it didn’t matter what the publicity said because people came because they saw the names “Grundmann” and “Bloom.” The guys had a dedicated following. So – Bloom announced Tim’s next show in a press release stating how the new musical would feature the stories of lesser known first ladies of the USA. It got published almost word for word in a “Theatre Notes” column in the Washington POST. (Woodward and Bernstein did not run the Style Section.) 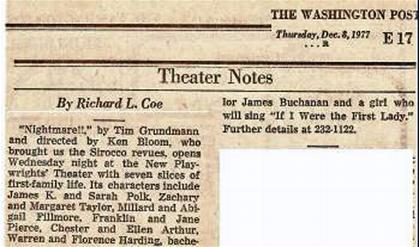 Then there was the time he got bored making cut lines (picture captions) on the publicity photos for a show and sent out a picture on which the cut line identified the photo of three of the performers and explained that they would appear as three famous stars of the Yiddish Theatre in Tim Grundmann's new musical OUT TO LUNCH a salute to Yiddish Theatre. (In actuality, the musical, OUT TO LUNCH was a sci-fi adventure story.) Someone at the POST decided to play along, and the picture was published real big in the “Weekend” section of the POST with the cut line as written and submitted. Our development director, Karen Brooks Hopkins (recently retired President of the Brooklyn Academy of Music,) answered the phone on the day the picture ran. Poor Karen. She had an irate woman on the line screaming "What are you doing? That Tanis Roach didn’t look anything like Molly Picon!" Here's the picture from the WEEKEND magazine of the Wash. POST ... 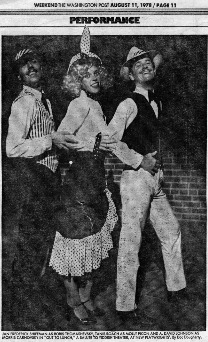 here's the published cut line for those of you who have eyes as good as mine:

Okay, so I didn’t wait until later to tell that story, sue me.

But back to the Biograph Theatre … 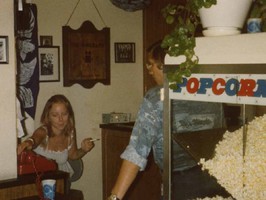 Here are two pictures of Melanie at the Biograph Theatre before her very fishy encounter. 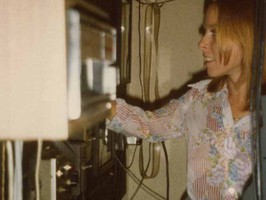 So, it’s about eleven thirty and George Holets comes into the projection room of the Biograph Theatre saying “Harry, you better come down to the lobby.” I ask why. He says “don’t ask, just come on down.” The expression on his face gives away nothing.

Oh shit, I think, trouble of some kind. There are times when I hate being the head of this non-profit and this was probably about to become another one of them. So I follow George down the narrow stairway toward the lobby, thinking why is it always trouble or drunks who make attending these fund-raising events such a pain in the … hold that thought. I turn the corner. There in the lobby stands little pint-sized Melanie in a puddle of goo peppered with chunks of something I can’t quite make out. First thought – she was very sick.

Her boyfriend, PJ, the theatre manager, was scraping up the goo off the red lobby carpet and shaking his head in disbelief.

“What happened?” I had to ask.

In a very disjointed fashion, Melanie explained with hardly a hint of anger in her voice – she was pretty stoned at the time – how PJ’s old girlfriend had planned to “pie” Melanie when the fund-raiser began, but when she finally got her shit together, the old girlfriend, whose name I can’t recall, was very stoned and unable to find any place that sold pies at that late hour, but surprise, surprise, the deli was opened so she bought a huge bowl, had the deli guy put a couple pounds of chopped herring into the bowl and came here and dumped the contents on Melanie’s head.

By the time she got all of this out in that disjointed, stoned story teller fashion of hers, I was in tears because I was laughing so hard.

Melanie continued toweling off her hair as PJ dumped a bunch of stuff that looked like kitty litter on the rug and began to vacuum it up.

Inside the movies continued to roll. 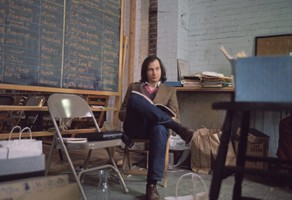