RECOLLECTIONG FROM THE BATTLE FIELD 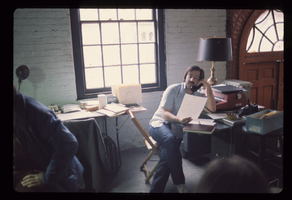 we sand-blasted the interior of the building

To The Left Is A List of Several Stories & Flashbacks

(I will add more in time)

a consideration regarding playwrights and manuscript plays

FUND RAISING: “For Lack of a Pie”

the story of two fund-raising events (a film festival & "Hamlet!!, the musical")

email memories from a variety of NPT vets along with pictures

that I will upload now and again

During our first season, we were sternly told, “You know, you’ll always have your hat in your hands.” That came from an elderly woman named Lucy Kennedy, the frail and genteel woman who was Zelda Fichandler’s head script reader at Arena Stage … the 800 pound gorilla of Washington Theatre institutions at the time. “You’ll always have your hat in your hands,” I remember Lucy telling us. So? We wanted to do theatre. Who cared if being nonprofit meant an endless of process of fund-raising. The fundraising sometime brought more laughs than some of the plays we produced. For more on fundraising, click on "fundraising (duh) and take a look at "For Lack of a Pie ..."