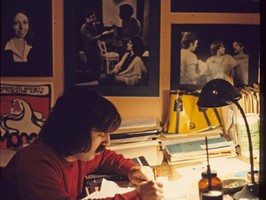 At my drafting board in the back room of "The Pits" (the basement of 1742 20th Street, NW Washington, DC where we had our first playwrights' theatre) The place sat 24, and in the Washington POST Dick Coe called it "the smallest legit theatre in town." 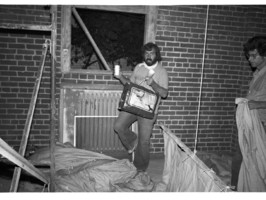 Me and a (sorry I forgot his name) volunteer putting the theatre on Church Street back together after we sand-blasted the entire interior. (More under the "Looking Back" and "Sandblasting" tabs.) 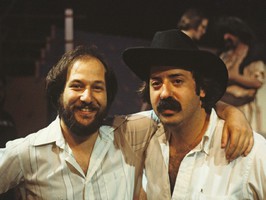 Ken Bloom and me on the set of Tim Grundmann's musical OUT TO LUNCH the summer of 1977.  There's more on Bloom in "Looking Back" and under the "Notable Folk" tab.

In my younger days - it was 1972 and I was 23 years old - I got a notion in my head that some friends of mine and I could help save the American Theatre from being totally over-run by Broadway commercialism and British playwrights by starting a non-profit theatre in Washington, DC devoted to aspiring American Playwrights and composers.

A core group of dedicated theatre artists, benefactors and theatre hangers-on accompanied me on the journey. Many opened their wallets and made the whole crazy scheme possible. But ultimately, it didn’t happen. The American Theatre has yet to be saved.  Most American regional theatres are still producing used plays and new American plays are few and far between on Brodway these days. Used plays -- excuse me, "revivals" -- abound. Very few new plays get produced. Most of the “new plays” are these ten minute things everyone is trying to pass off as legit theatre. (Gee, I’m not partial, am I?) So, in the long run, it didn’t transform the American theatre scene, but along the way we did manage to produce over 75 productions which were premieres or “second step” productions, and hundreds and hundreds of readings of new works (some good, some downright awful). And we had a lot of fun and some heartache during those twelve years I was associated with the venture.

My goal is for these random rememberings to celebrate our adventurous spirit and willingness to do just about anything so that, for a time, we could have a life in the theatre.

So just for fun – and perhaps to shoot warning shots over the bows of those launching their own non-profit theatre companies -- I thought I would try to remember a few highlights of my long though seemingly brief twelve years leading New Playwrights’ Theatre.